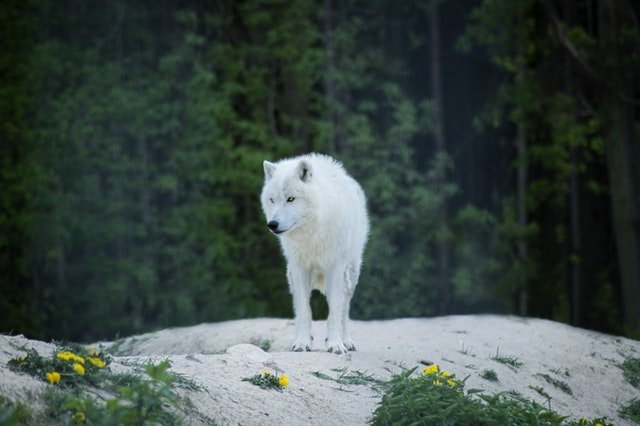 You may have noticed a growing trend of people raising wolf hybrids as pets. Many questions surround this divisive, hotly debated topic, including whether these hybrids are actually more dangerous or likely to bite than other domesticated dog breeds. Here’s what you should know about wolf hybrids in Indiana.

Can You Legally Own a Wolf Hybrid in Indiana?

Indiana law defines a wolf hybrid as an animal that is a mix between a wolf and another animal (or the offspring of such an animal). As the International Wolf Center describes, a wolf hybrid shares many of the physical and behavioral characteristics of a wolf. It is distinguishable from a coydog, which is a mix between a coyote and some other animal.

Technically, it is legal to own these hybrid mixed breed animals in Indiana. However, the law imposes specific responsibilities on wolf hybrid owners that go beyond what is typically required of a domesticated dog.

For instance, the owner of a wolf hybrid must keep the animal in a secured enclosure such as an outdoor pen area. The enclosure must either be completely indoors, with a roof, or it can have sides at least six feet high. The enclosure must be constructed strongly enough that the animal cannot escape. Merely putting the animal on a tether or chain is not good enough.

What Are Wolf Hybrid Leash Laws?

Additionally, a wolf hybrid owner must always keep the animal under control. Leashes cannot be longer than eight feet in length.

Individuals who violate the wolf hybrid or coydog laws in Indiana can be found guilty of committing a Class B misdemeanor. The offense can lead to a fine of $1,000. If the wolf hybrid causes serious injuries to someone, or if the owner has prior convictions for violating the state’s wolf hybrid law, the owner could face a felony charge.

Additionally, under Indiana law, local governments such as cities, towns and villages can prohibit ownership or possession of wolf hybrids and coydogs. Colleges and private homeowner associations may have additional restrictions that apply to these animals.

What are Wolf Hybrids’ Temperaments?

In general, wolf hybrids are a bit less predictable than domestic breeds. As the International Wolf Center explains, it’s a common misconception that wolf hybrids make better guard dogs. This is largely due to the fact that they may have strong fear responses that make their reactions to perceived threats much more heightened. In the wild, where predators loom, a wolf that reacts quickly to danger will likely survive. In domestication, however, something as simple as a child running through a yard could easily provoke and threaten a wolf hybrid, leading it to attack.

In short, as a leading expert on wolf hybrid behavior explains, wolf hybrids should not be considered domesticated pets. They are, in fact, wild animals, despite their physical appearances looking very similar to ordinary dogs.

Should You Be Concerned About a Wolf Hybrid Attacking You?

Unfortunately, the research indicates that wolf hybrids are far more likely to bite humans. As one news story out of Eaton, Indiana reveals, even a fenced area is not enough to keep an aggressive wolf hybrid from causing serious harm. In that particular case, the owner only had a four-foot fence, which the wolf hybrid was easily able to get over.

Even renowned experts like “The Dog Whisperer,” agree that raising a wolf hybrid can be unwise. “The more wolf in a hybrid, the wilder the animal and more problems for the humans who believe they can tame them,” Cesar Millan explains.

So, people who choose to breed, raise, and own wolf hybrids need to understand that they are knowingly choosing to keep a dangerous and wild animal under their control. Doing so imposes a serious obligation to maintain constant control over the animal at all times. Even a momentary lapse of care can be fatal, especially to a senior or child who may be nearby.

What are Your Legal Options If a Wolf Hybrid Bites You?

If bitten by a wolf hybrid animal in Indiana, the law holds the owner or keeper of the pet strictly liable for injuries that the animal inflicts. So, you may be able to bring a claim against the responsible individual in order to pursue money for your injuries and losses. This could help with medical bills, lost income from taking time off work, and even the expenses associated with reconstructive or plastic surgery that is needed after a wolf hybrid attack.

Many insurance companies will exclude coverage for wolf hybrids, and insurance companies may look for ways to deny a claim on technical grounds. It is often an uphill fight to seek compensation for injuries, even in fairly straightforward and clear cases of careless animal owners allowing their animals to hurt others.

For these reasons, you should call an experienced dog bite attorney right away. With offices conveniently located in Fort Wayne and Huntington, Truitt Law Offices is here to fight for your rights. We only get paid for our services if we are able to secure compensation for you.

Just remember: You should avoid speaking with insurance claims adjusters, never post anything about your injuries on social media and contact a lawyer as soon as possible about your case.